Holmen Iggesund’s Workington Mill has the capacity to run entirely on fossil-free bioenergy. Through the Grow Your Income project the biomass needed is sourced from farms in the local community.

Holmen Iggesund's own willow energy crop on the land adjoining the Workington Mill.

Holmen Iggesund’s Workington mill is powered almost entirely on bioenergy, partly from willow trees. Up to 35 per cent of the mill’s bioenergy is fed into the UK’s national electricity grid.

The mill, which produces Incada paperboard, has managed to substantially reduce its fossil energy usage since investing in a biomass-fuelled combined heat and power (CHP) plant in 2013. The switch from natural gas to biomass has resulted in fossil carbon dioxide emission reductions of 190,000 tonnes a year – equivalent to the annual emissions of 65,000 cars.

The benefits from this sustainability initiative don’t end here – the switch to renewable energy has helped the local community as well. Some of the biomass that is fed into the CHP plant comes from farms in northern England and Scotland, and is the result of a joint venture with local farmers to grow and sell energy crops from their less fertile land to Iggesund.

Willow (Salix) was selected as the energy crop in the region due to its suitability in northern temperate zones. The willow thrives in the cool, wet conditions and soil types of Cumbria, and has been cultivated for several decades as an energy crop in other parts of the UK and Scandinavia as well. The willows are cultivated for the production of wood chips, which are harvested and transported with the help of Iggesund, and then fed into Workington’s CHP system at the mill.

Planted in the spring, willow is a short rotation coppice (SRC) crop that produces its first crop after just three years, and can then be harvested every second or third year. As with other trees, willows absorb carbon dioxide from the atmosphere. They give a high yield, have a high-energy value, and improve the soil for subsequent crops, should a farmer wish to grow something else. At the end of the willow’s productive life (20-25 years) the land can be returned to conventional cropping. 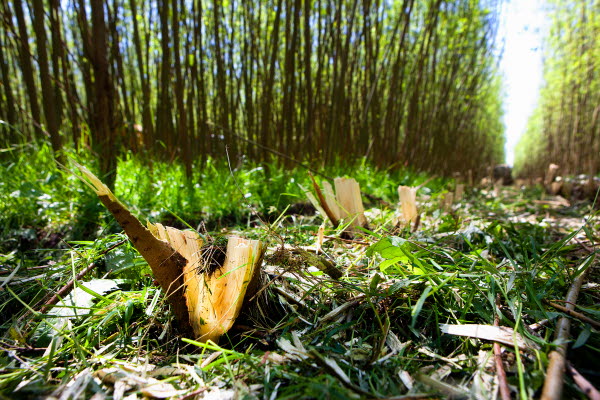 The Workington Mill project began with recommendations from the UK’s Department for Environment, Food & Rural Affairs that parts of Cumbria were highly suitable for energy crops. As the project developed, it became evident that the crops also help to counteract the effects of flooding and lead to greater biodiversity.

“It’s been an exciting journey. We began in a situation where many farmers were sceptical. But gradually, as they saw our commitment and our calculations for how they could earn more from their less fertile land, more and more of them joined our project,” says Michael McNiven, Harvesting Manager at Holmen Iggesund in Workington. “Yet another advantage of energy crops – in our case short rotation coppice willow – is that they give a good yield on less fertile land and do not lay claim to land that is better suited to food production.”

This initiative, which has created a new source of income for close to 200 farms in Northern England and Scotland (nearly GBP 700,000 was paid to farmers in 2020), was awarded the Rushlight Bioenergy Award in 2019. The Rushlight awards support and promote the latest clean technologies, innovations, initiatives and deployment projects for businesses and other organisations throughout the UK and internationally.

Today, Holmen Iggesund has also taken up the plough with its own eight-hectare willow energy crop on the land adjoining the Workington Mill.