Put your Memory to the test

Paperboard isn’t just for packaging. You can play with it too!

Who hasn’t played the Memory card game at some point? It’s a game for all ages that has been elevated a notch in Fredrika Berghult’s capable hands. Since 1995, she has created nine memory games with a variety of themes such as architecture, history, gardens and even chocolate, a memory game that includes a sampling of the real thing.

The designer and photographer at Svenska Memo has transformed the universal Memory game into treasured items. Berghult’s inspiration comes from her own childhood, raised in Swedish Värmland by parents who were inspired by French culture and art. “I was introduced to art early at home and that has made my life rich with imagination and colours. When I was a child, Memory did not present images of quality that I could relate to,” she says.

Svenska Memo’s card games use high quality images and themes that give both children and adults an opportunity to connect with subjects in a playful way and they are educational as well. “In many ways, my games are a nice way to start a conversation between a child and an adult,” says Berghult. “It’s a game that we both can play and with items we both can relate to.” 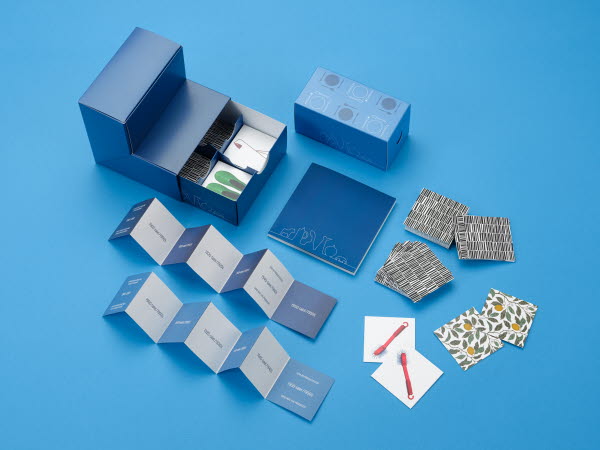 Berghult and Svenska Memo’s latest project is a celebration of design for the 175th anniversary of Svensk Form, a not-for-profit association that promotes Swedish design.

“Swedish design is one of the most important brands Sweden has,” says Berghult, adding that it was a challenge for the knowledgeable editorial staff to choose just 48 designs for Svensk Form’s 96-card Memory game. The final result includes a wide representation of Swedish design, from handicrafts and glass to graphic design and furnishings. There’s the iconic Dala horse, Carl Malmsten furniture, Josef Frank’s bold fabric, Ingegerd Råman’s glass, the Hasselblad camera from 1948 and, of course, Ikea represented.

“We have Tom Hedqvist, a contemporary graphic designer’s Zibidie pattern on the back of the cards. The popular pattern belongs today to ©Ikea Systems B.V. 2015,” says Berghult.

Berghult selected Invercote Duo 770 gsm for the cards and both Invercote G 260 gsm and Invercote G 350 gsm for the game’s intricate boxes. “Since I had made games with Invercote earlier, it was the first choice for me. I wanted to produce the game in Sweden, with Swedish material and I wanted something beautiful and sustainable. It was also important to be able to fold the boxes and design the game so we could make a flat package.”

Working with an extra thick Invercote Duo (770 gsm) for the cards was a revelation that made the offset printing process much easier and less expensive than in the past. “It’s incredible that we just had to print on two sides instead of printing on one paper, placing it on a piece of cardboard and then printing another paper and placing it on the other side of the cardboard. Now we had it all in one for the cards, and with a nice surface and a strong, clean profile. We could also add some soft touch surfaces that feel like textile for parts of the boxes and the handle.”

A digital version of the Svenskt Form Memory game is in the works, something that Berghult sees as a complement to the physical game. “People still want to meet and gather around a physical game even with interactive games. There will always be an attraction with board games and we see people keeping them for a long time and then passing them on to the second-hand market. These games are really sustainable.”

Visit our webshop for printed and unprinted samples of Invercote Duo: