With names like reef cell, portal, magic circle and vortex, Rogan Brown’s work simply must be seen to be believed. Cutting away the mundane, he reveals creations that are spellbinding, surreal and startlingly beautiful.

“To see the world in a grain of sand” is the William Blake quote you’ll find when you go to Rogan Brown’s website. And it’s not difficult to see why this poem has captured his imagination. A gifted artist, Rogan carves intricate paper sculptures from microscopic patterns found in nature. Exploring organic forms, like corals, fossil and insects, he creates patterns of such symmetry that it’s difficult to believe that you’re not in fact staring through the lens of a microscope.

How would you describe your work?

"I create wall-based relief sculptures from layers of cut paper, which are inspired by organic natural forms. In particular microbiological organisms."

When did you first become interested in paper art? 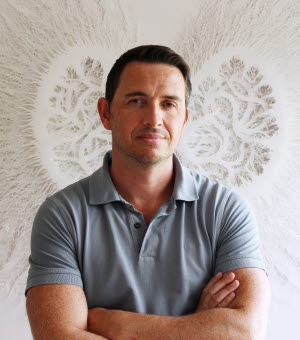 “I started playing around with paper cuts back in 2009 and soon became addicted, pushing the material boundaries of the medium with each new sculpture.”

Which artists do you look up to?

“I love science-art and two of the greatest scientists who were also gifted artists were Santiago Ramon y Cajal and Ernst Haeckel. Cajal’s book is constantly open on my table.”

Where do you get your inspiration?

“Everywhere. From bacteria to trees to neurons to spiral galaxies. I constantly surf images of nature in all its myriad complexity, diversity and scale. I’m always looking for correlations, echoes, repeated structures and formations.

What kind of tools do you use?

“A scalpel and a laser cutter. I create both hand and laser cut pieces.”

How long does a piece take to produce?

“The completely hand cut pieces such as ‘Cut Microbe’ can take up to 5 months to complete. But even the laser cut works sometimes take months because of the sheer volume of cutting involved. Time is an important dimension as it acts as a metaphor for the slow processes that dominate in nature such as growth or evolution.”

What challenges you when crafting?

“Patience obviously is key, building pieces slowly and laboriously requires a certain mindset. I like it because I can lose myself in the repetitive routine of creation.”

Can you describe the process?

“I go from rough sketches to a detailed final drawing, then I cut either by hand or laser. The cuts are built up by layering them; each layer is separated by a hidden card or foam board spacer, which creates the illusion that each sheet is floating.”

“I was looking for a medium to capture the delicate, fragile texture of the natural world, so I started experimenting with cutting paper and was astounded by its properties, how far it could be cut while still retaining its structural integrity.”

Do you have any favourites from your own work?

“I like them all in different ways, but I suppose the hand cut pieces represent a larger part of my life because of the months I spent working on them.” 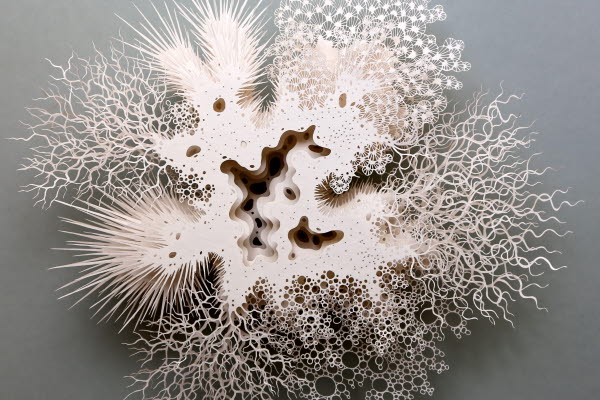 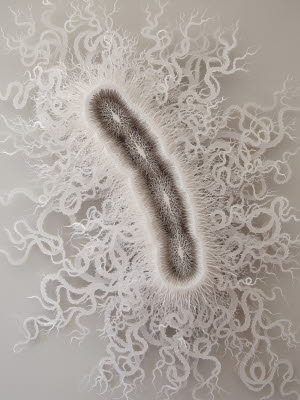 What does the future hold for you?

“Scale! I’m in the process of moving to a larger studio, which will allow me to create much larger scale works. I’m working on integrating the human body or its silhouette into the composition of the sculptures and I want them to be larger than life, so I need space!”.